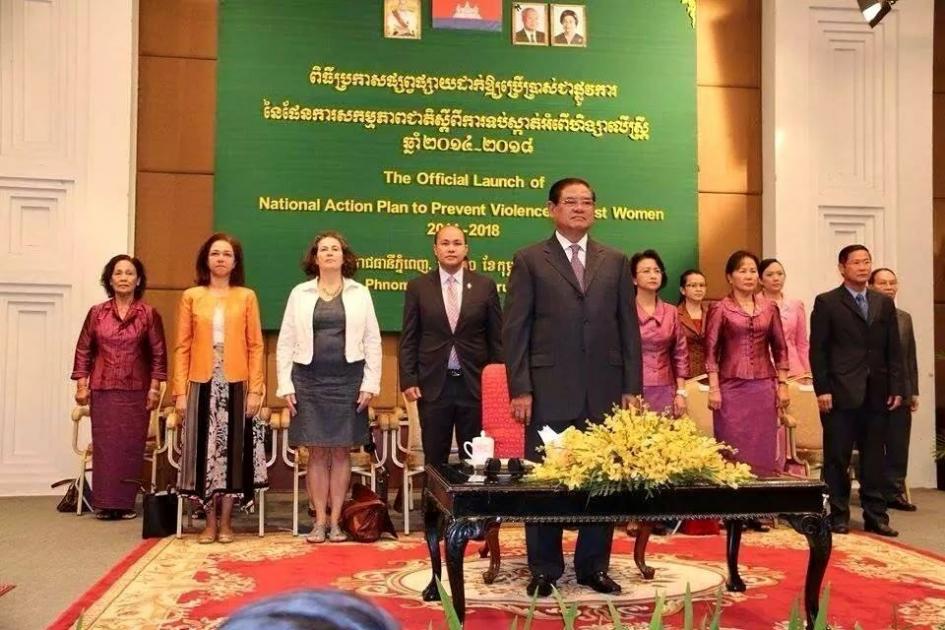 On 15 February 2015 the Royal Government of the Kingdom of Cambodia officially launched its second National Action Plan to Prevent Violence Against Women 2014-2018 (NAPVAW), reinforcing its commitment to eliminating violence against women. The Deputy Prime Minister and the Minister of Ministry of Interior, His Excellency Saw Kheng, officially launched the Action Plan, which sets out key strategies for government, national institutions, civil society, development partners and international organizations to work together to prevent and eliminate violence against women and provide protection to victims of violence.

His Excellency Saw Kheng emphasized the importance of the second NAPVAW for Cambodia and encouraged promoting awareness to change social behaviors, which discriminate against women, girls and vulnerable people and to support joint efforts for social changes.

The second NAPVAW has identified three priority violence issues which will be targeted as the highest priorities for prevention. These are:
1. Domestic violence;
2. Rape and sexual violence; and
3. Violence against women with increased risk, such as women with disabilities, women living with HIV and sex workers.

The inclusion of primary prevention as a priority focus area reflects the deepened understanding of the importance of addressing violence before it starts, and to develop new values and norms that are incompatible with violence and promote gender equality. The NAPVAW’s primary prevention strategy involves a range of key activities including school-based prevention interventions that target young people to change social norms around violence and promote respectful relationships and working with media to promote positive norms, gender equality and peace.

Findings from Partners for Prevention’s innovative research, the UN Multi-country Study on Men and Violence in Asia and the Pacific informed the development of the NAPVAW, providing a solid evidence-base for policy development.

The second NAPVAW builds on the first NAPVAW (2009-2012) and the event was attended by Government ministries and representatives from the private sector, civil society organizations, development partners and international organizations.

A copy of the NAPVAW in English can be found here: https://drive.google.com/file/d/0By4DrHxo3C94Skx4VmZUN2JoMmc/view?pli=1

A copy of the NAPVAW in Khmer can be found here: https://drive.google.com/file/d/0By4DrHxo3C94Skx4VmZUN2JoMmc/view