UN commemorates International Women's Day in Asia and the Pacific 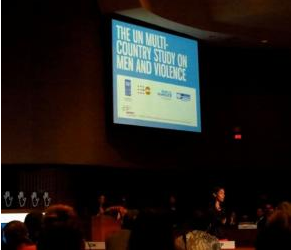 Four women who have overcome their history as victims of violence, and turned that pain into advocacy for others, told their stories to the guests at the United Nations observance of International Women’s Day in Bangkok.

International Women’s Day, observed annually on 8 March, is being marked in Asia and the Pacific at the United Nations Economic and Social Commission for Asia and the Pacific (ESCAP) Conference Center. This year’s Asia-Pacific commemoration was dedicated to ending violence against women and girls. Globally, up to seven in ten women will be beaten, raped, abused or mutilated in their lifetimes.

“Violence against women was the darkest secret – couched in silence and taboo – a manifestation of unequal power relationships, the low status of women and entrenched structural discrimination,” said Dr. Noeleen Heyzer, United Nations Under-Secretary-General and Executive Secretary of ESCAP and the keynote speaker of the event. “We cannot have, in the 21st century, missing women and girls, female infanticide, bride burning, acid attacks, and violence in our homes. We need to break the silence and the cycle of violence. We cannot allow violence against women to be normalized and accepted as cultural. It is not cultural, it is criminal.”

Speaking about the long and inspirational history of International Women’s Day, Dr. Heyzer said: “The movement to end violence against women is perhaps the best example of transformational leadership, and the greatest success story of international mobilization and leadership around a specific human rights issue. It has led to our articulation of international norms and standards that say ‘never again!’” The commemoration honored survivors of violence through the personal testimonials of four extraordinary women from throughout the Asia-Pacific region, who have channeled their own experiences into activism.

The four women speakers included the President of the National Association of Sex Workers in Malaysia, President of the Association of the Deaf of Chonburi, Thailand, the founder of the Association of Indonesian Migrant Workers in Hong Kong and an Australian advocate who works on behalf of survivors of domestic violence. Each woman in turn told their personal story of surviving gender-based violence, and how they have used that history as motivation and inspiration for their advocacy work towards ending violence against women. Pointing to the difference that has been made by women’s leadership and mobilization, Dr. Heyzer said: “International standards have been set, in international documents, but also in everyday life. For the first time, states rather than just individuals, were called on to accountably and decisively act on issues related to violence against women, to pass national legislation, to formulate national action plans, and to allocate the necessary budgets for implementation. These norms and standards also clearly stated that custom, religion, and tradition should never be used to justify violence; they called for prevention, protection, provision of services and also the ending of impunity.” Dr. Heyzer was also recognized for her lifetime achievements in championing women’s human rights, with the painting, “Half the Sky,” by artist Goh Chui Kuan and commissioned by Vimala Sundram and Ayesha Harben of Malaysia, being dedicated to her.

The commemoration also presented new research on why men use violence against women and girls, and how violence can be prevented. Partners for Prevention, a UNDP, UNFPA, UN Women and UNV regional joint programme for gender-based violence prevention in Asia and the Pacific, surveyed over 10,000 men in six countries in Asia-Pacific to develop these innovative findings, making it the largest study undertaken worldwide.