Sumaya from Bangladesh raises awareness about violence prevention on her campus 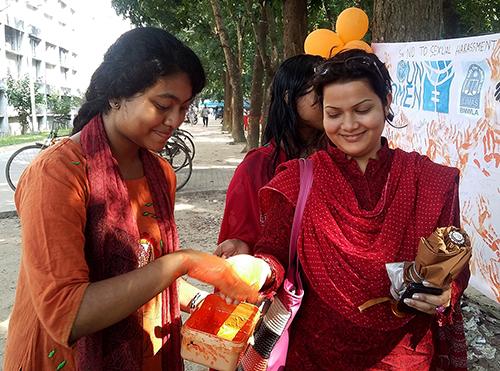 "I want to build awareness about sexual harassment to prevent it. Girls should raise their voices and get justice."

Sumaya, left, during an 'Orange Day' event to prevent sexual harassment on  the campus of Rajshahi University.

This summer, Maki Enokita, our UN Volunteer based in Bangladesh, sat down with Sumaya Rahaman, a 20-year-old law student at Rajshahi University who is working to make her campus a safer place for women and girls. In the following conversation, Sumaya reveals the changes she has witnessed on and off campus, since the beginning of a student-led project that is supported by UN Women to raise awareness about violence prevention at her university.

What makes you interested in working on a program to prevent sexual harassment on campus?

I come from a middle-class family in an educated yet conservative and religious community. My father is a banker and my mother is a homemaker.

University is a different world.  It has been a wonderful experience.  But at the same time, I also encountered unpleasant experiences both on and off my campus just because I am a woman. These experiences range from being called derogatory terms to having to witness my friend being beat up when he tried to help us when we were being harassed.

When these events happened, nobody around came forward to help us although the perpetrators had no excuse and acted only because they saw an opportunity to harass girls.

I am devoting my time and passion to this program because I want to see my campus safe. I don’t want to see another girl hiding her face after being sexually harassed. I want girls to rise together, let their voices be heard, and get justice.

How are you preventing sexual harassment on campus?

Prevention of sexual harassment starts with raising awareness. Therefore, I am actively involved in the campus campaign to raise students’ awareness about violence against women, specifically, sexual harassment.

For instance, I directed 'Seven' – a student-cast play that re-tells the lives of seven women. It generated lively discussions on the causes and impacts of the sexual harassments they lived through.

Together with my peers, I organized academic workshops, cultural activities, a talk show and a rally to raise awareness of the International Day for the Elimination of Violence against Women and Girls, also known as the 'Orange Day' on our campus.

We also organized a debate competition for students with the topic of sexual harassment prevention. I am personally very proud that I was part of the winning team.

What is more, I found it very useful to work with new students during their orientation week. I believe that if we work together from the start, we will be able to declare our campus as safe one day.

What are the changes that you have noticed among your peer students?

Generally speaking, following our awareness raising campaign, people on our campus have become increasingly conscious of the laws against sexual harassment.

Our campaign is making perpetrators afraid – and sometimes ashamed, and we are giving victims courage to speak up. Female students are now asking me how and where to complain, whereas before, women didn’t really want to. They feel they are not alone and they have the support of the administration, of the teachers and of other students.

What’s next for you after you graduate and the program ends?

I will definitely continue advocating to prevent sexual harassment after the programme ends!

I have already started working with JUSTICIA, a group of pro-gender lawyers preventing sexual harassment on our campus and in our community. This work experience nicely brings together my passion for a safer campus and my academic background in law.

About P4P in Bangladesh

Violence is widespread outside the home in Bangladesh: Seventy-six per cent of tertiary level female students faced sexual harassment on campus or from other students while off campus, according to a study by UN Women.

In response, UN Women with support of SIDA launched a project, entitled Building Capacity to Prevent Violence against Women, which pilots and promotes good practices in four of Bangladesh’s tertiary educational institutions. The project aims to prevent sexual harassment through raising awareness, mobilization and development of mechanisms and actions in light of the High Court Guidelines to Prevent Sexual Harassment Against Women (2009). The project also engages selected communities through civil society interventions.