Unprecedented UN survey of 10,000 men in Asia and the Pacific reveals why some men use violence against women and girls and others do not 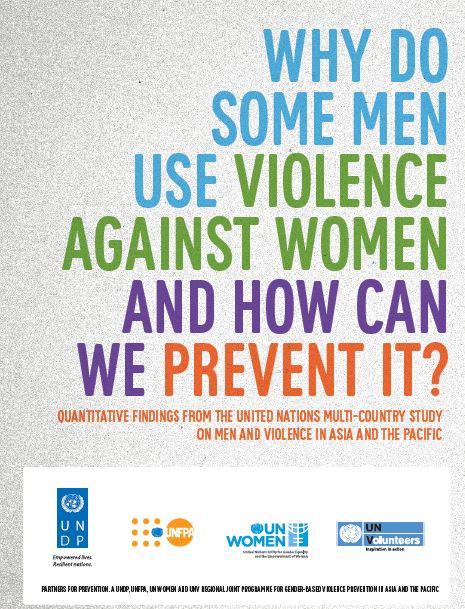 The study report, entitled ‘Why Do Some Men Use Violence Against Women and How Can We Prevent It? Quantitative Findings from the UN Multi-country Study on Men and Violence in Asia and the Pacific’ was conducted in Bangladesh, Cambodia, China, Indonesia, Sri Lanka and Papua New Guinea. It explores the prevalence of men’s use of violence against women in the survey sites, and shows what factors make men more or less likely to use violence. The report also makes important recommendations about what we can do to prevent violence against women.

“This study reaffirms that violence against women is preventable, not inevitable” says James Lang, Programme Coordinator, Partners for Prevention. “Prevention is crucial because of the high prevalence of men’s use of violence found across the study sites and it is achievable because the findings indicate that the majority of the factors associated with men’s use of violence can be changed. The study provides new evidence from men themselves on what needs to change and the specific entry points for these changes,” he says.

Emma Fulu, Research Specialist for Partners for Prevention says, “This research is a major contribution to the field of work on violence against women, and we hope to see this new knowledge used for more informed programmes and policies to end this violence. Given the early age of violence perpetration we found among some men we need to start working with younger boys and girls than we have in the past. We also need laws and policies that clearly express that violence against women is never acceptable as well as policies and programmes to protect children and end the cycles of violence that extend across many people’s lives”, she adds.

The study was conducted by Partners for Prevention, a UN Development Programme (UNDP), UN Population Fund (UNFPA), UN Women and UN Volunteers regional joint programme. The study asked men about their use and experiences of violence, attitudes and practices, childhood, sexuality, family life and health.